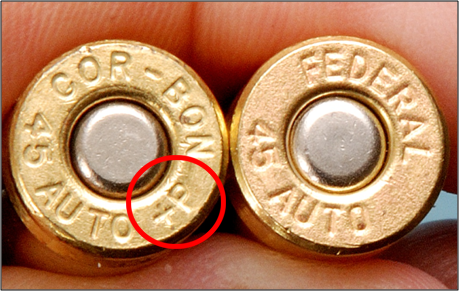 The Sporting Arms and Ammunition Manufacturers' Institute (SAAMI) is an association of the nation's leading manufacturers of firearms, ammunition and components. SAAMI was founded in 1926 at the request of the federal government and tasked with:

The standards they set are designed to enhance safety in firearms and ammunition by creating standards that all manufactures use.  This includes the amount of powder in a standard cartridge (depending on caliber) so that the pressures in the chamber when fired are consistent.

A designation for ammunition that has been loaded to produce pressure levels that is higher than the SAAMI (The Sporting Arms & Ammunition Manufacturers Institute) loading limit for normal Maximum Product Average (MPA).  The “+P” designation, usually head stamped on the cartridge and printed on the ammunition box, means higher than the normal MPA.  This should only be fired in weapons designed by the manufacturer to take the higher pressures.

SAAMI specifications for standard chamber pressures compared to +P cartridges are as follows:

A designation for ammunition that has been loaded to produce pressure levels that are higher than the SAAMI loading limits for +P ammunition, but for which there are in fact no SAAMI standards.  The “+P+” designation is generally head stamped on the cartridge and printed on the ammunition box. SAAMI has established no Maximum Product Average (MPA) loading limit for the +P+ designation therefore a manufacturer’s specific loading limit must be consulted in order to determine the MPA pressure level produced by that manufacturer’s +P+ ammunition. Due to having no upper limit on the MPA pressure of +P+ ammunition, it is not possible or prudent for an arms manufacturer to certify a firearm as capable of handling it based on that designation alone.  Most +P+ ammunition is not sold to the general public but to law enforcement agencies with the boxes usually marked “for law enforcement use only – not for resale.”